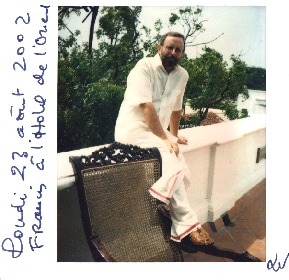 Having arrived in India in 1968, brought here by chance, by the enthusiasm of the movements of the French Revolution, Francis Wacziarg falls in love with this country.

It was love at first sight once off the plane, in the humid chaos of Bombay. Francis spent four months wandering across India, speaking to people and reading, devouring the works of Indian thinkers.

Or those that thought and lived India, like Romain Rolland. Thus the name of Francis’ son, Romain. Francis Wacziarg lived, explored and discovered India during four months, during which he had made his decision: to come back, as fast as possible, forever. He adopted India just like India later adopted him, giving him a passport, for which he renounced to the French nationality.

However, there was not a single drop of French blood running in his veins. His father was of Polish origin, born to a family who fled the the pogroms, the only sibling to be born on French soil. His mother was an aristocrat born in Constantinople, modern day Istanbul, and had only known a series of peregrinations through the big capitals of Europe, until the arrival of her family in France, then almost reduced to poverty.

Francis was thus situated at a rare crossing, the unlikely meeting between an Ashkenazi and a Sephardi from diametrically opposite cultures. Francis maternal grand-father spoke 17 languages fluently (The hardest ones being Russian, Chinese, Hebrew, Arabic, etc.), while his paternal grand-parents were illiterate. Francis distinguished himself by his ancestry. By birth, he became an exception: He was born into the world on board the Nyassa steam, a portugese coloured boat, in a location designated by a longitude and a lattitude, somewhere in the territorial waters of Cuba, off of Havana, where destiny led them in this dawn of 1942.

Later, in Pondicherry, Francis stumbles on an ancient building full of history, situated on Romain Rolland street: “Public Education”. I see his inimitable smile which made his eyes disappear while he said “empty the schools and turn them into hotels”. It was the motto that he ironically attributed to himself, since a journalist had (in vain) tried to make him say it.

Him who took education ever so seriously! As children or teens we could ask him anything, as long as it was related to education: Courses, summer school, initiatory trips, everything was good as long as it elevated the spirits of people. Actually, his motto could have been “Let hotels themselves be places of education”. For each voyage is a discovery. Pondicherry is a little corner of France sheltered from the Indian continent, where Francis liked to rediscover the french savour, a country where he was not really from, yet he remained so French within.

The gentleman crazy about India used to say that he would take his retirement in Pondicherry, and he also said that he would never retire, for his joy resided in his work. “Francis, you are a living paradox”, people would tell him. No doubt that was the key of his passion for India.  He jumped from the train of life “en marche”, before becoming an old dwelling place to be restored. He left without taking his Pondicherian retreat, leaving for orphans all those whom he had taken under his paternal wing.